‘We’ve done it!’ The Restoration of the World’s Only Greenstone Church 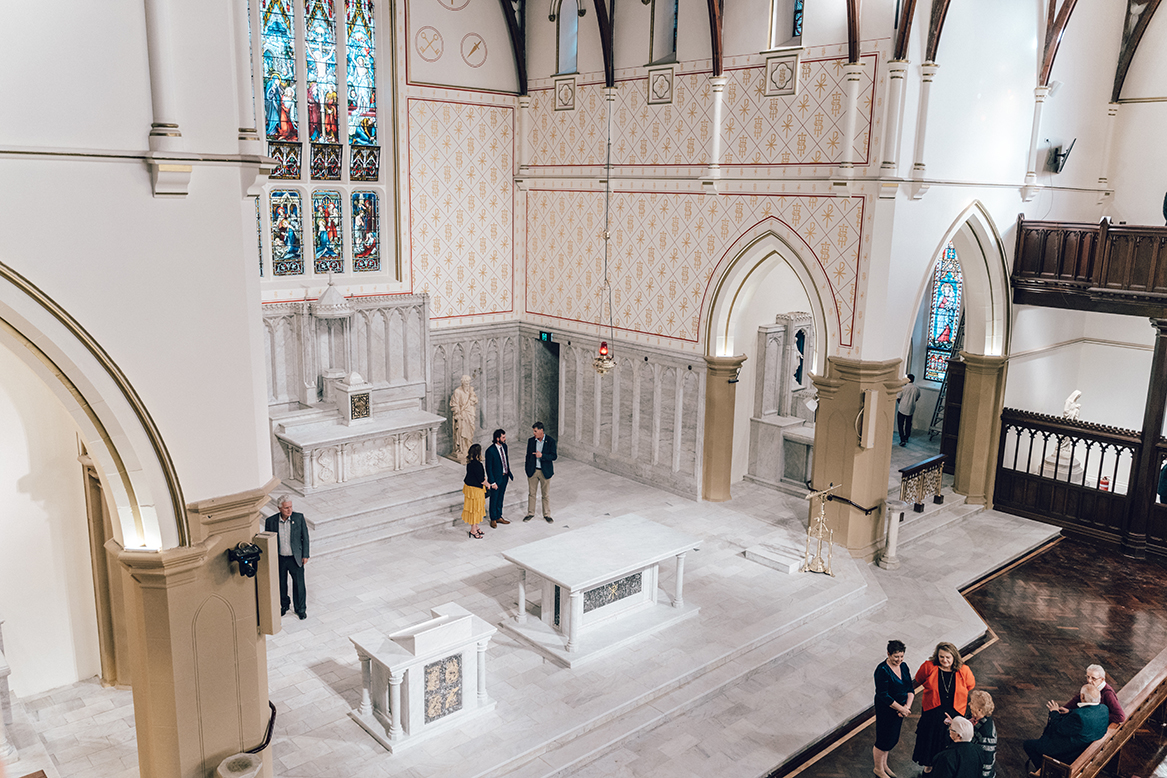 The restored interior of Sts Peter and Paul’s Church

We’ve restored the ‘only greenstone Church in the world.’

It was Tim Fischer, God love him, former deputy Prime Minister of Australia – and one of the most decent human beings you’d ever want to meet – who said to me, in the presence of Ursula Stephens:

Keep repeating it over and over again; it’s the ‘only greenstone Church in the world.’

So, I repeat, ‘it’s the only greenstone church in the world.’ 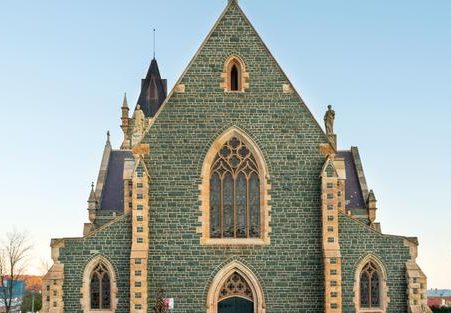 Sts. Peter & Paul, Goulburn – ‘The only Greenstone Church in the World’

When I saw the finished restoration of Sts. Peter & Paul, I started to weep.

I began to think of all the people who have been part of this journey of restoration – and I was simply overwhelmed with joy and thanksgiving.

We are part of something much bigger than ourselves.

The glorious greenstone was quarried just outside of the city on Bungonia Road and is estimated to be 440 million years old!

We can feel the creative act of God, our Father, whose Son enters our world to love, save and heal us.

Furthermore, he breathes on us the Holy Spirit, beautifully depicted in the subtly stained glass windows, and now a bronze dove hovering over the baptismal font where faith is first aroused.

We are witnesses to four phases of Sts. Peter & Paul. The building of it, the structural restoration of it, the beautification of it, and its development as a pre-eminent place of pilgrimage. The Building of Sts. Peter & Paul

The first public Mass was celebrated in Australia in 1803.

The Archdiocese of Sydney was established in 1834, followed by Melbourne in 1847 and Goulburn Diocese in 1862 – a year before Goulburn was declared a city in 1863.

The first Bishop appointed never made it due to throat cancer – it seems.

Bishop Lanigan made it here in 1867, and it was he who commissioned the ‘only greenstone church in the world.’

The foundation stone was laid in February 1871, the nave of the Church was finished in 1872, then followed the transepts, sanctuary and tower in 1887-1890.

Andrea Stombuco was appointed architect. Born in Florence around 1820, the Victorian gold rush attracted him to the Great South Land of the Holy Spirit.

He was described as ‘stylishly extravagant – a lavish entertainer, a gambler, fond of music and the good life.’

Not so Bishop Lanigan.

Patrick Hartigan – known as John O’Brien – wrote of him:

William Lanigan was a man who had no jollity in his makeup, and could not appreciate it in others.

He was an exemplary priest, a great missioner, and proved a successful Bishop, but all the same, he was the dourest and sourest ecclesiastic in the Australian Church.

Lanigan was followed by Bishop John Gallagher, a highly intelligent man, deeply loved by his people. It was he who developed the orphanages and St. John of God Hospital. It is said that when he entered the city on horseback to take up commission as third Bishop in 1900, 10,000 people lined the streets. Different stages of the restoration 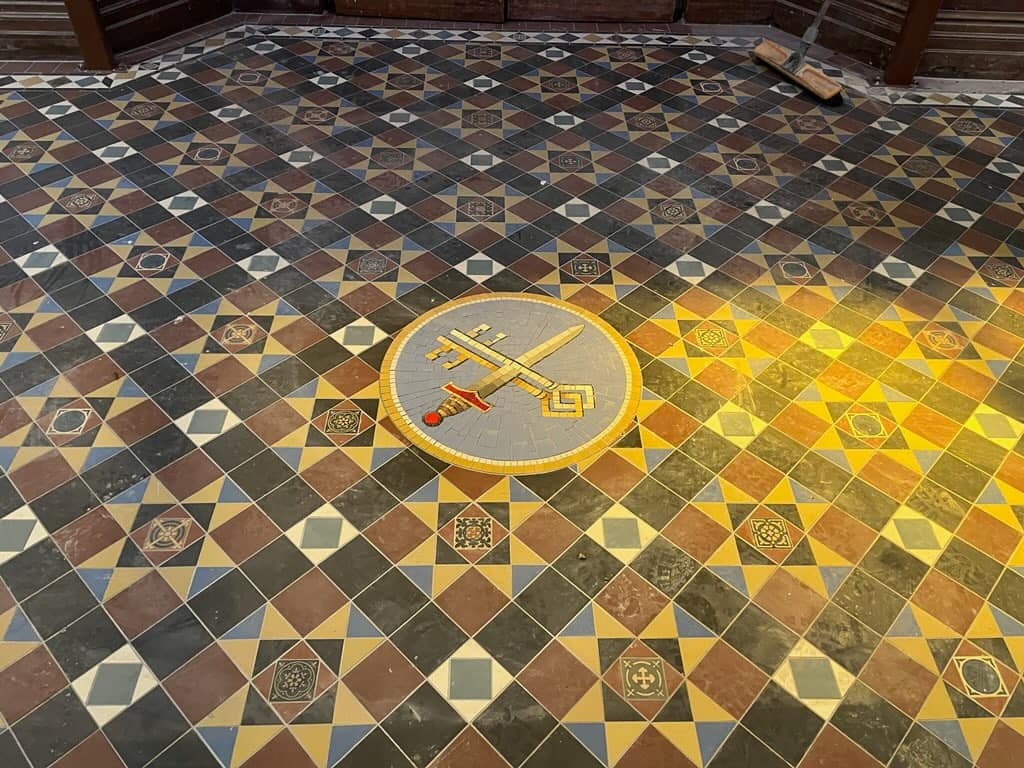 Father Laurie Blake began the structural restoration in 1982. I call them the ‘dark days.’ So much was being done to save the building, but no one could see the fruit of this most important work. Father Laurie was a native of Goulburn and we should seek his intercession in the Communion of Saints for the flourishing of faith and most especially the paying down of the debt. Restoration of the 19th Century French Stations of the Cross

The Year 2022 has seen the total restoration of the building, both inside and out.

It is a triumph of creativity, hard work, professionalism, co-operation, perseverance, and, not surprisingly, $ 9 million!

What we have here is something truly splendid for the city, the Archdiocese, the country, and the world.

They say that renewal in communities is achieved with:

Sts. Peter & Paul now offers a unique opportunity for people to have an abiding and transforming experience of beauty.

The building itself is very handsome, especially now that the surroundings have been attended to.

The stained glass windows are delightful. The floor is spectacular. The Ambo, the Altar, and the Tabernacle are world-class.

The restored French Stations of the Cross take your breath away.

Surely the Baptismal arrangement is going to heighten the dignity and call of the laity, called as you are ‘to be light to the world, salt of the earth’ (Matthew 5).

The word ‘pilgrim’ comes from the Latin word peregrinus, it means foreigner or stranger.

Whether we like it or not, our lives, as beautiful as they are, will end.

Our faith sensibly encourages us not to get too comfortable here, but rather to see our life as a pilgrimage – as foreigners or strangers – to the eternal Father.

Pilgrims to Sts. Peter & Paul will have their desires satisfied and deepened.

We are living at an opportune time. Pope Francis says that it is not so much an ‘era of change, as a change of era.’

History is our witness that profound spiritual renewal accompanies such moments.

Secularism – i.e., a world without God – is tangible and aggressive. We know this. It’s been like this since Adam was a boy.

But the ‘secular bubble’ is burst by people of faith – and might I add reason.

The classic definition of faith comes from Hebrews 11:

Faith is the substance of things hoped for, the conviction of things unseen.

People will come on pilgrimage to Sts. Peter & Paul and find Christ in the Eucharist, in the Sacrament of Penance, in being silent and still, in praying the rosary or parts of it, by moving around the stations of the cross, entering into the heart of Christ, who is not dead, but alive – well and truly alive.

It may be that when they light a candle in front of the Sacred Heart, or Mary Protector of Families, or St. Joseph or St. Patrick they encounter the love of Christ, receive a special grace for their suffering and sorrow, be given new impetus to ‘put one foot in front of the other’ amidst the trials and tribulations of life.

This is our fourth phase, and the most important one, as we journey deeper into the 21st Century.